Your English speaking driver-guide will be waiting for you as you disembark in the port of Messina. Drivers will be holding a sign with your name on it, so there is no way to miss him! We highly recommend leaving the port as soon as possible to avoid traffic and better enjoy your time. You will be picked up at 8:00 am.

You will be driven to the western most side of Sicily from Palermo. Your first stop will be at the amazing Temple of Segesta, built by the Elimian, an old civilization whose origins are perhaps Turkish, but that was later colonized by the Greeks, becoming one of the most important Greek colonies in the west side of Sicily. This is the first Greek Temple to ever be built in Doric style. The Temple has thirtysix perfectly preserved columns, that have defied the passing of time and several earthquakes.

You will also get to visit the Greek amphi-theater, a typical example of the semi-circular theater style, and then the medieval town of Erice, located 880 meters above the sea level, and surrounded by ancient Elimi and Phoenician walls on the northeastern side of the city. Two castles define the spectacular skyline of this town: 'Pepoli Castle' and 'Venus Castle', dating from the Norman era, but built on ruins of the ancient Temple of Venus. Surrounded by a lush park, the hilltop castles alone are worth a stop in Erice, which offers charming old stone streets and medieval churches. Pepoli Castle, was ancient feudal stronghold, though Erice was eventually ceded to the Crown as a demesnial city. The landscapes that can be seen from the castle towers, are breathtaking. Both castles have undergone modifications at some point over the centuries,however they still own that distinctively medieval character the traveler expects of such fortresses.

Finally you will visit the Gothic-Catalan style Cathedral built in the 1300s, with its marble decorations, where you will see the famous Black Virgin picture, highly acclaimed in the area, and you will stroll the village and taste the famous marzipan cakes made with almonds in different flavours (pistachio, pinots, orange, lemon and so on..) by the famous pastries shop “Grammatico”.

You will be returning to the port at 3:30pm, on time for boarding your ship.

* Tickets, meals and extras are not included. 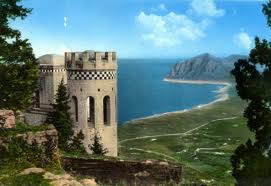